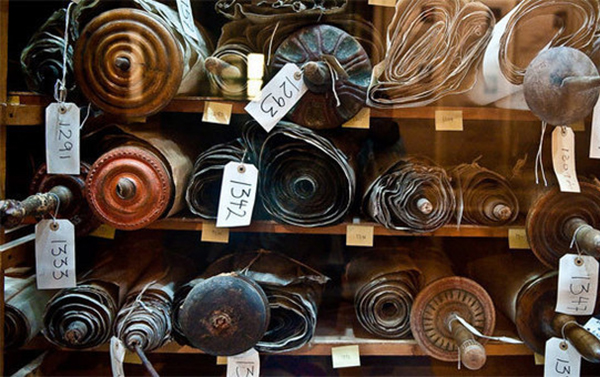 In January, 1980, ENJC President Stanley Goldick sent a request to Westminster Synagogue in London for information about acquiring a “Holocaust Torah.” Westminster Synagogue was the recipient of 1,564 Czech scrolls from congregations across Bohemia and Moravia that were wiped out by the Nazis. For years, the scrolls lain unused and unattended in a Prague synagogue that was being used as a warehouse, arriving at the Westminster Synagogue in 1964. Over the years, these scrolls have been sent to Jewish communities in over 20 countries and have become symbols not only of the sorrows of a tragic past, but of hope, survival and rebirth.

The shipment of our scroll was arranged by congregant Harold Pepper, who was a trustee of ENJC’s the Board of Directors at that time, through his London LEP Transport office. The ENJC Czech Scroll arrived in East Northport in July, 1980. It was given to our synagogue on “permanent loan” from the Memorial Scrolls Trust in London. As guardians of our precious scroll, it is our duty to maintain and protect it for current and future generations.

Conservation of our scroll is of utmost importance. Only a very few scribes are authorized to work on these scrolls and must adhere to very strict rules. A scribe: “Must recognize the integrity of the scroll is paramount, will neither add, change or remove signs, embellishments or any visual style (based on midrash or not), to or from the scroll. Every effort will be used to maintain the integrity of the scroll, keeping the same writing style, ink colour and thickness, stitching etc.” Also they accept the purity of the ancient script which at times may seem to conflict with the current halachic standard of scribing, as many of these scrolls were written prior to the strictness of halachah today.

The Rescue of Holocaust Scrolls (from The Memorial Scrolls Trust)

The fact that the Torah Scrolls exist at all is a marvel. They were saved from the Czechoslovakian regions of Bohemia and Moravia during WWII, surviving the planned destruction of everything Jewish and the horrors of the communist regime that controlled the country in 1948.

It is thought that the artifacts survived because Prague, although badly damaged, was not levelled during the fighting. The scrolls were stored in a synagogue in a Prague suburb and they remained (decomposing) in this building until 1963, when the Czech government sought a buyer for the treasures. Eric Estorick, a British art dealer, introduced the opportunity to Ralph Yablon, a founding member of London’s Westminster Synagogue. Yablon purchased the scrolls and donated them to his synagogue.

On February 7, 1964, 1,564 scrolls were delivered to London. According to Jeffrey Ohrenstein, “They were in plastic bags, like body bags.” Many of the scrolls were in disrepair. Fortunately, Rabbi David Brand, a sofer, was looking for work, and presumed that the synagogue would have at least one scroll in need of repair; he was shown an entire floor of scrolls in need of his attention. He worked in the synagogue for nearly 30 years, repairing all the scrolls – personally.

Shortly after their arrival in London, a trust was created to care for the scrolls and repairs were initiated. Over the next 30 years, over 1,400 scrolls were sent to synagogues around the world. Now the Trust focuses on raising awareness of the responsibility attached to the housing of these historic documents. Synagogues and institutions are asked to devote one Shabbat during the year to the Memorial Congregation to coincide with the anniversary of the deportation of that community and to memorialize the many murdered Jews by remembering their names on that Shabbat and Yom HaShoah and Yum Kippur.

Our scroll, known as Czech Memorial Scroll #1155, came from the town of Kolin and was written in 1690. 25 scrolls were saved from Kolin, in the Czech Republic, the last remnants of a vibrant Jewish community. Several of these Kolin scrolls have been received by congregations in Israel, England, Australia, Michigan, Virginia, Massachusetts, Florida, Maryland, Colorado, Illinois, and New York. These Torahs are not “kosher” but rather, pasul, marred by missing letters and broken seams, and having been found without protective covering, with some swathed in tattered prayer shawls, two in women’s garments, and another tied with a small belt from a child’s coat. Many of the scrolls were torn or damaged by fire and water, a testimony to the grim fate of the congregations that had once used them in prayer. 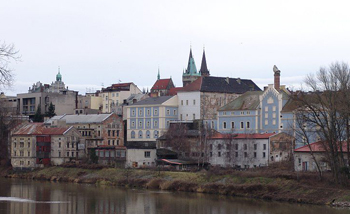 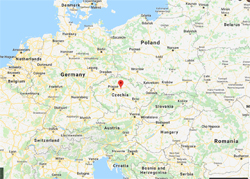 The Jews of Kolin

The town of Kolin lies in the central Bohemian region of the Czech Republic, 55 kilometers east from Prague along the Elbe River. Until 1918, it was a part of the Austrian Empire. The Jews of Kolin, Roudnice, Bumsla, and Nachod comprised the “Karban,” a community second only to Prague. The first record of Jews in the town, from 1376, mentions 16 households that had, by the 15th century, established a synagogue and cemetery. The Jewish section was in the western corner of the city’s walls with the Zidovska ulicka, Street of Jews, lined by classical and Baroque homes. In 1541, the Jews were expelled from Kolin by King Ferdinand and headed to Poland, returning in 1557. Ferdinand granted them safe-harbor for a period of one year to collect their debts, and they were again expelled in 1561. After Ferdinand’s death, Maximilian II allowed the Jews to return in 1564. By 1618, the Jewish community was the largest in Bohemia but was forced to pay heavy taxes to the royal treasury. Jews were forbidden to appear on Sundays and Christian holidays in parts of the city inhabited by Christians, forbidden to have dogs, and Jewish butchers were not allowed to sell meat to Christians. Jews were only permitted to own one home and one horse. They were not permitted to engage in any trade in which Christians worked, and Christians were not allowed to enter into the service of Jews. The plague struck the region from 1613-1614 and the entrances to the Jewish street at both ends were walled up. 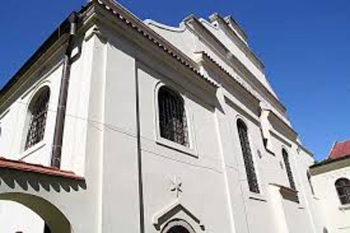 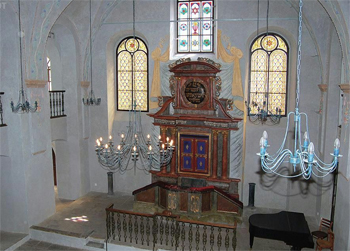 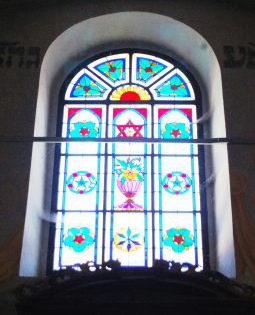 By 1621 those trades that had been restricted to Christians were once again opened to Jews and by 1655 the Jews of Kolin were directed to organize as a community with their own court and governance. A new synagogue with an ark was donated by Austrian financier Samuel Oppenheimer in 1696. It was built low to the ground and hidden behind the wall of ghetto buildings, as royal building codes restricted synagogues from being as tall or as beautiful as churches. The interior, however, was quite beautiful, with stained-glass windows and vines, fruits and Hebrew scriptures decorating the walls.  In 1744, Empress Maria Theresa decreed that all Jews should leave Bohemia, but by 1849, full civic equality was restored. However, Jews were not permitted to buy houses or land owned by Christians. In 1881, the Jews of Kolin numbered 1,148, representing almost 10% of the population. One of the largest and most prominent yeshivas was located in Kolin, the “Beit Midrash-Anstalt.” The yeshiva, headed in its heyday by the Talmudic scholar El’azar Kallir, was visited by Moses Montefiore in 1855, who endowed a foundation for students there. By the time of World War II, there were approximately 500 Jews in the town.

In 1938, Czechoslavakia was dissolved and Nazi Germany assumed the Sudeten region. With the outbreak of World War II in September, 1939, Bohemia and Moravia became a protectorate of Nazi Germany. Kolin became a central residence for the Gestapo and police. Zyklon B for the concentrations camps was produced there. Discrimination and violence against the Jews began by 1940. Jewish shops were confiscated and Jewish women were forced to work in a local soap factory. Jews could not leave their homes without wearing a yellow star, nor visit theaters, cinemas, exhibitions, lectures, auctions, stock exchanges, swimming pools, or public schools. They could not buy nor read newspapers, listen to broadcasts, own a telephone, or smoke. They could not farm, engage in medical or legal practices, work as bankers or as book publishers. They were not permitted to own fur coats, woolen sweaters, ski equipment, or drivers licenses.

Transports from Kolin to the Terezin Ghetto began in 1942, with 2,202 Jews deported. Ritual objects from the synagogue were sent to Prague’s Central Jewish Museum. From Terezin, the Jews of Kolin were sent to numerous concentration camps. Only 104 Jews from Kolin survived the war. The synagogue was used as a store for blood-stained articles and its seats were used as firewood. Twelve bombs were dropped on the cemeteries, with headstones badly damaged. Many headstones still lie on the ground to this day. 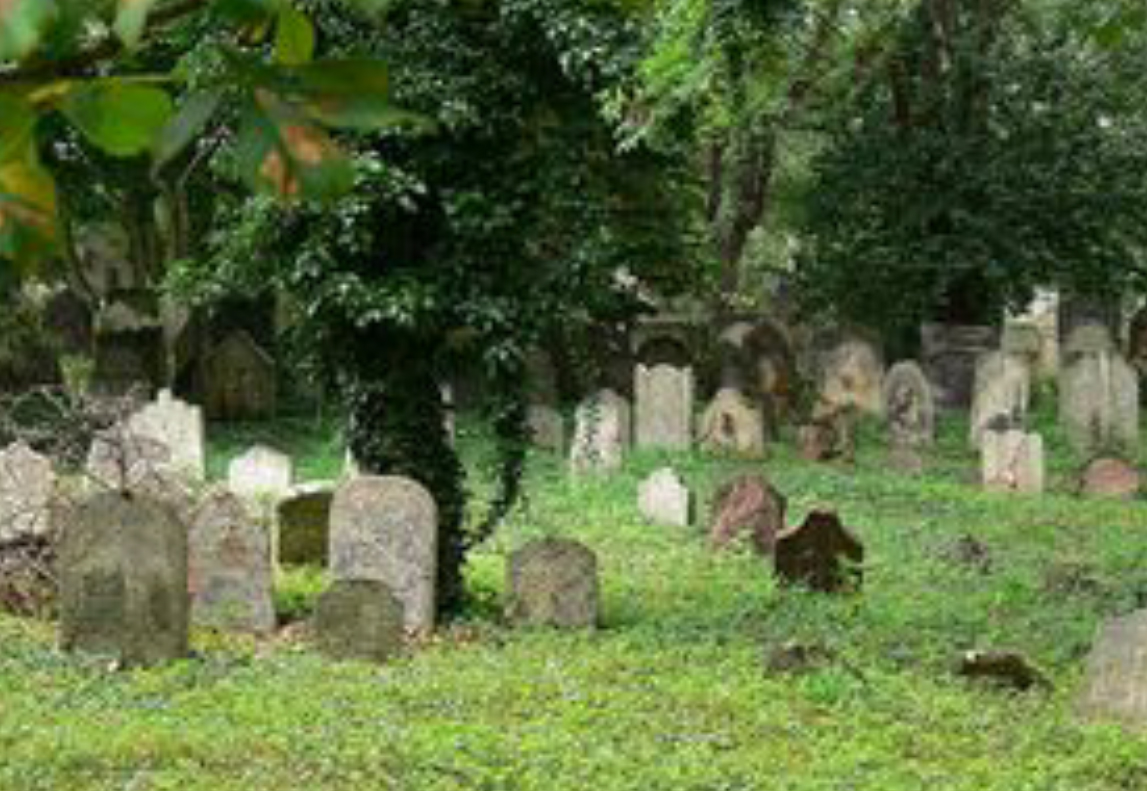 In 1945, a small Jewish community was reestablished, but by 1966 only 15 Jews were left in the community. The last Jewish resident of Kolin died in 1981. A synagogue and two Jewish cemeteries remain. The synagogue has been restored and is used as a concert hall with a permanent exhibition telling the history of Kolin’s Jewish community.

Sunday, February 21 at 4:30 pm
The Memorial Scrolls Trust and Our ENJC Holocaust Story
Join on Zoom for a presentation by MST Trustee Louis Roman. Lois will take us on a virtual trip to London to visit the MST museum and tell us about our own scroll's journey to the ENJC.